It’s not exactly a NEW rule, but further restrictions on so-called “clipless” pedals (aka “clips”) start now. Novice riders have been banned from riding clipped-in since the 2013 season. The new round of restrictions will be a two-year phase-in, which began at midnight on Jan 1, 2020. Here’s how it breaks down:

There are a couple exceptions in the rule for 2020.

– Cruiser is an expert-level class, and all riders can run clips.

– Open Class is an open wheel and open pedal class for ages 12-under only.

For those of you new to BMX Racing, let’s take a quick look at the rather-confusing terminology.

In our sport, riders have been running clipless pedals for many years. The term “clipless” is a bit of a misnomer, because these pedals use special shoes with a cleat on the bottom, which “clip-in” to the pedal, thus making the rider one with the bike. 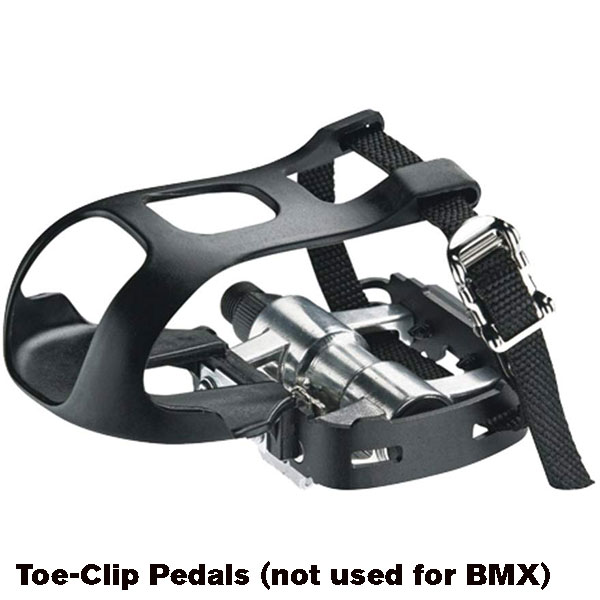 The term “clips” stems from a type of pedal which has physical “toe clips” to hold the rider’s feet on the pedals, and allows them to apply pedal-force in the up, as well as the down-stroke. As you can see above, it is a cage-type apparatus. Many cyclists (not BMXers, however) still run toe-clip pedals, because they are cheaper, allow for easier escape and don’t require the rider to purchase special shoes. 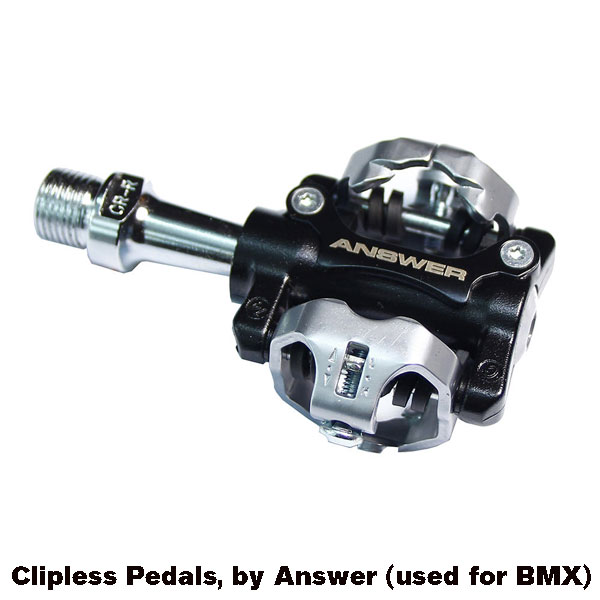 The “cleat-and-receiver” pedal was said to have been invented in the late 1800s. They were ultimately dubbed “clipless” pedals because they had no toe clip, even though it would serve to confuse generations of cyclists thereafter. They should have called them “cage-free” pedals, don’t you agree? They would have had a nice jump on eggs of the same designation. 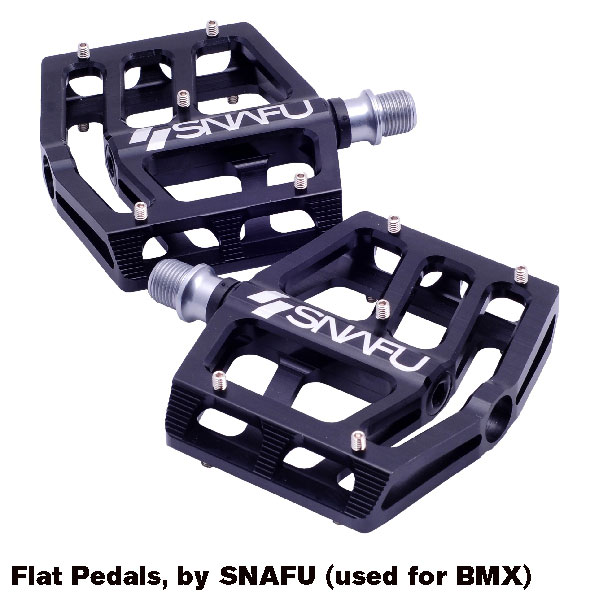 FLAT, or “platform” pedals are what all Novice riders are currently running. You may hear the phrase “clips or flats” bandied-about at the track and on social media. This refers to someone’s preference to run flat pedals or clipless pedals.

The clips vs flats debate is right up there with Ford vs Chevy, Coke vs Pepsi and “Tastes Great vs Less Filling” in terms of its polarization of the populace.

For the youngest riders (and Beginners/Novices), however, the consensus is pretty clear among BMX coaches that running flat pedals in the early days of their racing career is important. Flats pretty-much require the rider to learn critical bike handling skills which they may not otherwise learn if their foot is mechanically-attached to the bike.

UCI, which is the international governing body for cycling, outlawed clipless pedals for all riders 12-under a couple years ago, stating in its 2019 rulebook: “riders aged 12 and under must use flat pedals with no interlocking pedal-cleat system.” This encouraged USA BMX to make a similar change since, among other reasons, USA-based riders competing at the world championships would need to be able to race at a level of high performance on flats.