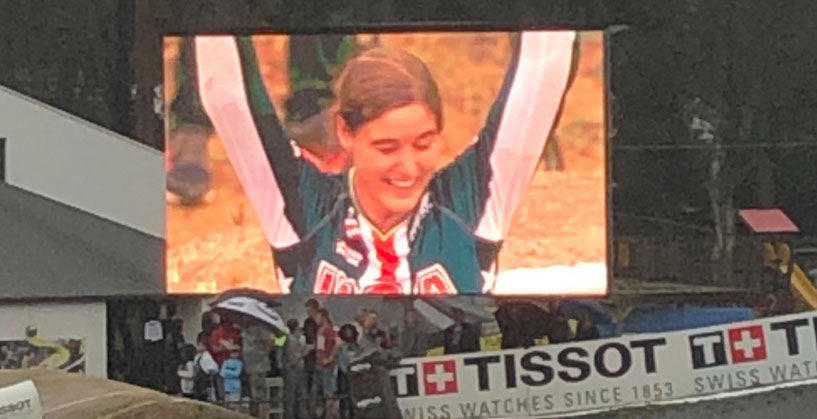 The dust (or rain depending on how you look at it) has settled after another UCI World Championship. This year saw the legendary track at Circuit Zolder in Belgium host the event. Prior to the race reports were showing that temperatures during the week would be the hottest in Belgian history. I can vouch for the heat as I spent the week an hour away in Brussels.

Popping over to Zolder on Saturday for the Juniors and Elites the weather went from scorching to soaking; with a steady rain coming down all day. Unlike domestic U.S. tracks that are generally dirt (slurry coat not withstanding) and asphalt turns, the Euro tracks are layered in dolemite (crushed limestone). Being rock and not dirt there is no mud to be had with only shallow puddles to contend with. I’ll have to admit that there was some sticker shock when I found out that it would cost €120 for my family of three to watch the festivities. Safely situated in the grandstands along the last straight I settled in to watch the 1/8ths through the finals.

Junior Women had both Payton “P-Nut” Ridenour and Mckenzie “Skittles” Gayheart from the U.S.A., but it was New Zealand’s Jessie Smith that came out on top followed by Argentina’s Augustina Cavalli, and newly crowned European Champ Zoe Classens (Switzerland) in third.

Junior Men was won by Tatyan Lui Hin Tsan from France. European Champ Ross Cullen (Great Britain) had to be a pre-race favorite, but went down along with fellow Brit Ryan Martin.

The Women’s Elite final saw two Americans (Willoughby and Stancil), two Dutch riders (Smulders and Baauw), two French riders (Etienne and Maire), Australia’s Sakakibara, and Colombia’s Pajon load up in the gate. After a rough start to the World Cup season, where Alise wrecked or got passed in the lead and a first moto tumble; Mrs. Willoughby put together the dream lap and won it wire to wire.

By the time the Men’s Elite main launched off the 8m hill the rain was coming down pretty good. The Netherlands’ Twan van Gendt exploded from a middle lane to get into turn one in the lead. Early race favorites David Graf (Switzerland) and Joris Daudet (France) were veritable Siamese twins exiting the turn.

Van Gendt proceeded to nose bonk the double in the middle of the second straight and pogoed to flat ground, barely recovering before the jump into turn two. I couldn’t tell if Graf and Daudet tangled or if slick conditions were to blame, but both of them went down hard; taking France’s Jeremy Rencurel and GB’s Kye Whyte with them. Australia’s Anthony Dean had gone down in the first turn, slowing up Niek Kimmann (Netherlands) and Andre Sylvain (France) who were now able to avoid the carnage in the second turn for second and third, respectively.

The only big changes in the Olympic Rankings saw Australia pass Colombia and Great Britain to put them in 5th overall which would qualify two men to go to Tokyo. Dean in the main and Sakakibara in the semis at the Worlds indicate that they would be the clear choice for those two spots. The Dutch Army gained 606 points with van Gendt’s win, which also moves Twan into the number two scorer position for Holland.

For the Women New Zealand leap-frogged Brazil to take over the fifth spot. This is due, in large part to Jessie Smith (Junior) winning the Worlds. Keep in mind that the UCI Nations points count the top three scorers from each country which includes Elite and Junior. New Zealand is one the countries that relies on Junior riders in the rankings; along with Denmark (Sorensen) and Switzerland (Classens).

There are a couple of races in Thailand and Canada the week of 8/10, but nothing that will really shake up the standings. The next big races are the SX World Cup rounds in Rock Hill and Argentina; both in September.

Editor’s Note: Carl turned this report in mid last week, but due to a technical glitch, it was not possible for us to post it before now. We apologize to all-concerned for the delay. /MC