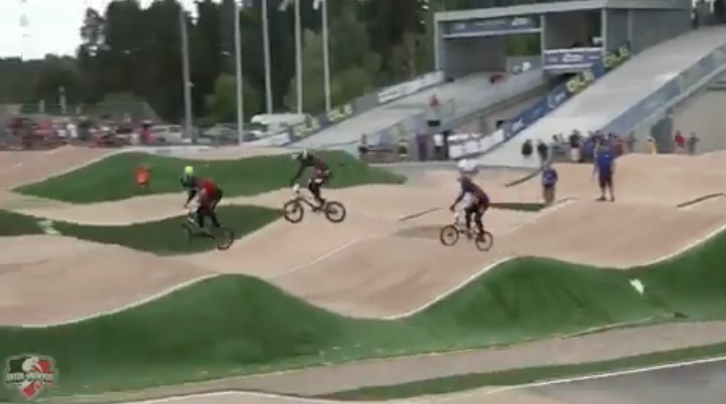 The primary means by which a country can earn a quota position for the Olympics is from the “Olympic Rankings.” The system looks at the top three scorers (Junior and Elite, within each gender class) from each country and adds them up.

This makes the 10th place position the proverbial “hot seat”. In the current standings, the African continent is not represented.

For the men, South Africa is the highest-ranked African country, so they would bump out the Russian Federation, currently sitting in 11th place.

For the women, Egypt would take the last spot, knocking Canada out. Keep in mind that this is not the only criteria that can earn a country a spot in the Olympic Games.

As predicted, the European Continental Championships (CC) in Valmiera, Latvia created a small tremor in the rankings. With points only available through semis it was feast or famine for most. The Dutch dominated, taking five out of the possible six Elite podium positions.

For the men it was Niek Kimmann with the win, followed by Twan Van Gendt, and big Dave van der Burg; although Van Gendt is not one of the Netherlands’ top three scorers (that honor goes to Joris Harmsen).

For the women Denmark’s Simone Christensen sandwiched herself in third between Laura Smulders, Judy Bauw, and Merel Smulders in fourth.

Also, as mentioned in the last report, this week’s points update included not only the CC results, but also the French National Championships that were not in for last week’s posting.

The end result is the French men sitting way on top of the leader board with a whopping 3919 points. The French women didn’t move up, but they did put some more distance between themselves and fourth place Australia.

Other winners after this weekend are the British men, who saw Whyte, Sharrock, and Evans in the Euro final (punctuated by a 1-2 punch in Junior Men from Ross Cullen and Ryan Martin).

Junior Women’s Ellie Featherstone also hit the podium for Team GB. Christensen’s third place eased Denmark past Ecuador by one point, which gets them off the hot seat; at least temporarily. Brazil was another country for which the Nat Champs points weren’t showing last week; so, as predicted, they shot up two spots past New Zealand and Colombia (and into a position to qualify two riders).

The good news for Switzerland is that Simon Marquart is back from injury and collecting points; making the main in Latvia with a sixth place finish. What is good news for the Swiss is bad news for the Americans, as they are now in striking distance of putting the USA men one further spot away from qualifying the max of three men. David Graf (Switzerland) didn’t make the final after wrecking in the semi, and expressed his dissatisfaction with the race, course, and organizers on Instagram.

Here is a grid with the current rankings:

I didn’t see any chatter about this, but I saw the below video that introduced a new sub-discipline; “Team Time Trial.” I don’t know if this was organized by the UCI or by the local event organizer. Three riders from the same country loaded in the gate and completed a lap with the elapsed time of the slowest rider being the “team’s” score. Again, I’m not sure how many countries participated, but Latvia won the event.

I have a hard time seeing the need for this discipline. The Team Time Trial (TTT) is a fairly neat event for road cycling, where a team usually consists of riders with different strengths. Some riders are lightweight climbers, some bulkier sprinters, while others are all-arounders, or even Time Trial specialist. The idea of these diverse riders working together to operate in an efficient pace line over a long distance makes sense, but three riders on a BMX track doesn’t to me. There is no benefit of drafting or trading places “breaking the wind” up front on a short BMX lap.

Up in Canada, James Palmer, Gaby Malenfant, and Daina Tuchscherer scarfed up the points at the Drummondville Canada Cup. This keeps Canada’s hopes alive for qualifying via the Nation Ranking. The women are currently in 11th and the men are 12th.

It’s a dead week (July 15-21), as we head into the World Championships in Zolder, Belgium; so there won’t be a report next week. I’ll be on the ground in Zolder on Saturday (July 27) for the Elites, and should be able to provide a report the following week.